Millennials need print – the future for our industry

By Neil Falconer on March 29, 2016 in Print Tribe Features 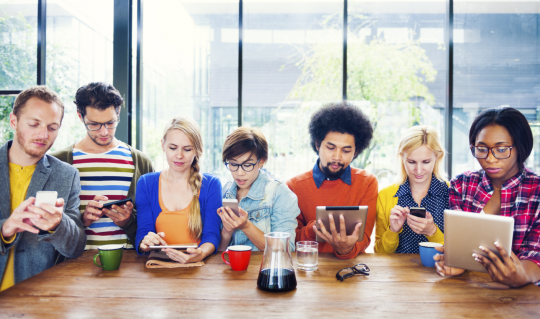 Two recent research studies give fresh reasons for confidence that as the baby boomers ‘pass on to the other side’, print will still have central role in commercial markets.

First came an InfoTrends multi-client study with the snappy title of ‘Direct Marketing Production Printing & Added Value Services: A Strategy for Growth’. Then came QuadGraphics study called ‘Millennials: An Emerging Consumer Powerhouse’. It must be noted that both studies come from sources inclined to support print and both focus on the US market. However even with a large pinch of salt and the conclusion drawn from our own drupa research series that Europe follows the US in adopting new technologies for both the consumer and the print industry, both reports can be read as important leading indicators for European habits.

Millennials are those born between 1980 and 2000 and accounted for 24% of the adult population in the 28-member European Union in 2013 [for the US it was 27%] according to the Pew Research Center. Whilst as a proportion of the adult population the Millennials are forecast to grow in the US to become the largest ‘generation, overtaking the baby boomers; in Europe they will remain a smaller generation than people aged 50yrs and older.

However in both the US and Europe Millennials will hold increasing economic power and increasingly will dictate the future role of the print industry. And crucially they are the first generation for whom the digital communications world is all they know, not a taught development as for baby-boomers. So how will Millennials interact with print?

According to a survey by the Radicati group, Millennials in the US are inundated by a staggering average of 567 items of promotional email/social media each week. It is no surprise that they largely ignore it. Whereas the US Postal Service reports the average household receives just 19 pieces of direct mail per week.

Millennials were reported to most interested in reading DM from retail/clothing/grocery outlets, followed by more discrete interests eg restaurants, electronic stores etc. What was common to all is that they want to go online to respond – increasingly by mobile device. According to the InfoTrends report, respondents used an average of three different media channels; so print/marketing providers must offer a multichannel experience to succeed.

So in summary, Millennials are a huge and increasingly influential generation in economic terms. They use digital media more than older generations but still want to use print; but only as part of a multichannel communications process. Used well, print can cut through the digital ‘noise’ and gain attention but print providers must ensure they know how to be part of the multichannel marketing world.